Posted on 07/01/2018 by Seven Incorporated Trades of Stirling

In late October, the Incorporation held its Annual Whisky tasting courtesy of Calum McMillan and the Allan Park Hotel.

It was a popular night as ever and Calum took us on a journey of comparisons. The Whiskies sampled and compared in no particular order were: 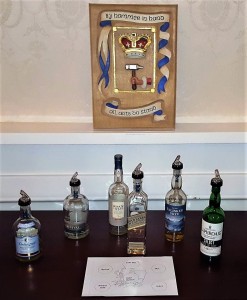 A Speyside Single Malt, the Dalwhinnie Winter’s Gold is an innovative bottling from Diageo. A 2015 addition to the Highland distillery’s range inspired by the chilly climate up in the remote part of Scotland where their single malt Scotch whisky is distilled – as the label remarks, it was “Crafted by the Cold”. It’s made only with spirit that has been distilled between October and March.

This is a Highland Single Malt from the Glenglassaugh Distillery which was mothballed in 1986 and sat silent for over 20 years until it was purchased by a group of investors and started production again in December 2008.

The Glenglassaugh Revival has been matured in a balanced mix of ex-red wine and fresh bourbon casks, vatted and re-racked for double maturation in rich sherry casks. Bottled at 46%, non chill filtered and of natural colour

This is a Single Malt from one of the oldest and smallest distilleries in Scotland, where fine single malt whisky has been crafted since 1794, Oban Little Bay produced in the smallest casks available at the distillery, 200-litre ex-bourbon barrels.

Johnnie Walker Gold Label was relaunched in 2012. Built around a core of single malt whisky from Clynelish, a partnership of Speyside and Highland Whisky

Talisker Skye was introduced in early 2015, named after the beautiful island on which the distillery resides. It’s matured in a combination of refill and toasted American oak casks, with a slightly higher proportion of toasted casks.

This is a Single Islay Malt and is aged in a combination from carefully selected casks with spirit selected from their Quarter Cask, Pedro Ximenez Casks and Triple Wood (Oloroso sherry) with a final addition of 10 Year the heart of the spirit drawn from a final maturation in American oak casks – rarely used for scotch whisky.

The members thanked Calum for an enjoyable night. 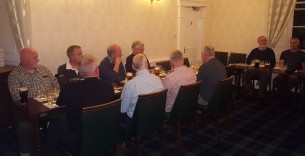 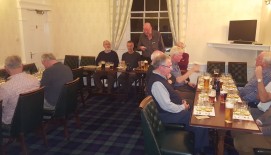 The power to grant incorporated status to trades rested with the magistrates of royal burghs. An incorporated trade was granted the right to monopolise and control their trade within the burgh. Trade Incorporations were usually constituted by a seal of cause granted by the magistrates but some were constituted by use and consuetude. A strict monopoly was enforced within the burgh and non-members of an incorporation were not allowed to trade within the bounds of the town.
View all posts by Seven Incorporated Trades of Stirling →
This entry was posted in Uncategorized and tagged Diagio. Bookmark the permalink.