Posted on 07/09/2018 by Seven Incorporated Trades of Stirling

The Incorporation of the Hammermen held their Annual Burns Supper on the 24th August. It commemorates the Bards visit to Stirling and notably the Golden Lion (then the Wingate) in August 1787.

The evening was a night Burns would have been proud of. The Haggis was piped in by Shauna Shand and Douglas Lawson followed by a masterful address to the Haggis by Sandy Anderson. Grace quickly followed by Deacon Andy McEwan.

After dinner came the highlight of the night, the Immortal Memory, given by Brian Goldie current Junior Vice President of the Robert Burns World Federation and past President of Falkirk Burns Club. He gave a great insight into the life of Burns, his songs and rhymes.

Following Brian there was a musical interlude by Dougal Thornton singing a few Burns songs. David Sibbald another well-known Burns man and Hammerman, who according to Brian “has spoken at Burns Suppers around the world in places no one would have thought of”, gave us a few interesting Scots poems including Burns own “To a Mouse”

The Hammermen instead of having the traditional Toast to the Lassies have their own unique twist in having a Toast to the City of Stirling, this was given by Deacon Andy McEwan who gave a talk on the roads of the City without too many mentions of Railways and Buildings.

No Burns Supper would be complete without a rendition of Tam O Shanter. David Sibbald did the honours with his own truly outstanding rendition of it.

Bailie Craig Bryce gave a vote of thanks with a special thanks to Brian Goldie and to Colin Botfield, Deacon of the Hammermen of Glasgow. He thanked all present and the Golden Lion Hotel and staff for an excellent night.

Dougal then rounded off the evening with Auld Lang Syne. 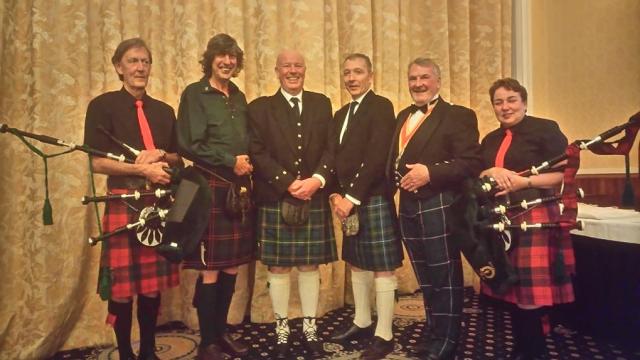 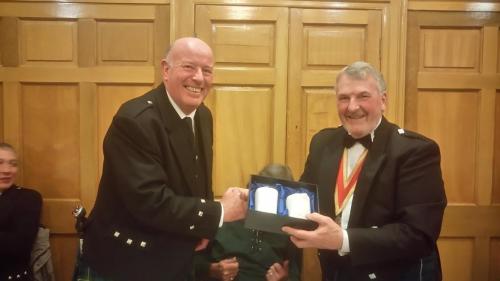 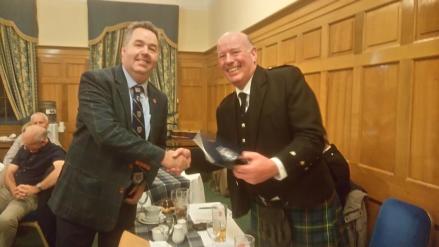 The power to grant incorporated status to trades rested with the magistrates of royal burghs. An incorporated trade was granted the right to monopolise and control their trade within the burgh. Trade Incorporations were usually constituted by a seal of cause granted by the magistrates but some were constituted by use and consuetude. A strict monopoly was enforced within the burgh and non-members of an incorporation were not allowed to trade within the bounds of the town.
View all posts by Seven Incorporated Trades of Stirling →
This entry was posted in Uncategorized and tagged Brian Goldie, David Sibbald, Falkirk Burns Club, Glasgow Hammermen, Robert Burns, Robert Burns World Federation. Bookmark the permalink.